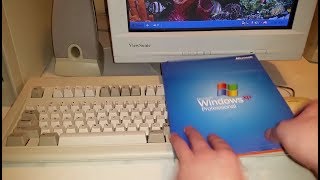 IF YOUR ARE CONFUSED ABOUT THIS VIDEO PLEASE CHECK THE PINNED COMMENT FOR MORE INFORMATION why did this get a million views seriously stop wasting you ` Re time here adn go watch pizza brian. https://www.youtube.com/channel/UCUU9dgv6dKzW-rmgmm94Stg

In the year 2000, a questionable salesman offers the finest computer of its kind to an old mushroom for the splendid price of just $999. It had all the things you could expect to be in new condition at that time, including the hot (as in temperature) AMD Athlon K7 processor and a whoop-ass 128MB of RAM. Unfortunately, it didn’t have much more to offer than that, but that didn’t stop Old Mushroom from being so gullible. Luckily, the system did not fry out on the first boot, so Old Mushroom got to work on the computer… or so he thought he was working. In truth, he had no idea what the hell he was doing, as made evident by his spasms which seem deliberate enough to make him try to look like he’s working when he’s not. Enter the following year, New Mushroom and his Compaq Armada m700 are working together synchronously, making the greatest use of the mobile Pentium III processor to work harder and do much more work and also have time to not work by wasting that time using AOL Instant Messenger 5. While Old Mushroom is totally useless and incompetent, New Mushroom is a serious hardass typist and productive citizen that also looks as spiffy as the 90’s kids you used to see on television. He was that kind of guy that you’d see and think both “HEY YEAH COOL I’M CHATTIN’ ON AIM WITH MAH FRIENDS TALKIN’ ‘BOUT LONGBOARDIN’!” and “I’m the chief executive officer of a huge corporation and I work ten times harder than my dad.” One fateful night in October, New Mushroom skated into Old Mushroom’s house through the window and threw an upgrade copy of Windows XP Professional at him. “Yo, dumb face! Your computer is shit, put this thing on there and it’ll make everything faster!” Wouldn’t you know it, “faster” is the key word to sell to these idiots who can’t even bother checking the BIOS settings to see if the cache is enabled or not. Well, okay, New Mushroom didn’t really sell Old Mushroom anything, he just bought two copies from CompUSA and gave his second copy to his lazy grandparent for free. Yah… did you really think that would automatically make his computer better without considering the existing constraints?! I DIDN’T THINK SO. Sadly, as computers run down on the cheap- I mean, become more affordable in the next few years (thanks to an overwhelming number of bad capacitors to be exposed in several years from there), Old Mushroom’s cache problem is destined to go unnoticed for all of eternity as he will just buy a new Pentium 4 instead… and then another… and another… and then he’ll start throwing away the old computers so Kugee can devour them… at least New Mushroom isn’t concerned in the slightest because he is more deserving of money due to his vigorous CEO work and other things. Yeah, New Mushroom! Let your grand dad get brokes if he gonna be trashin’ his compies!!!